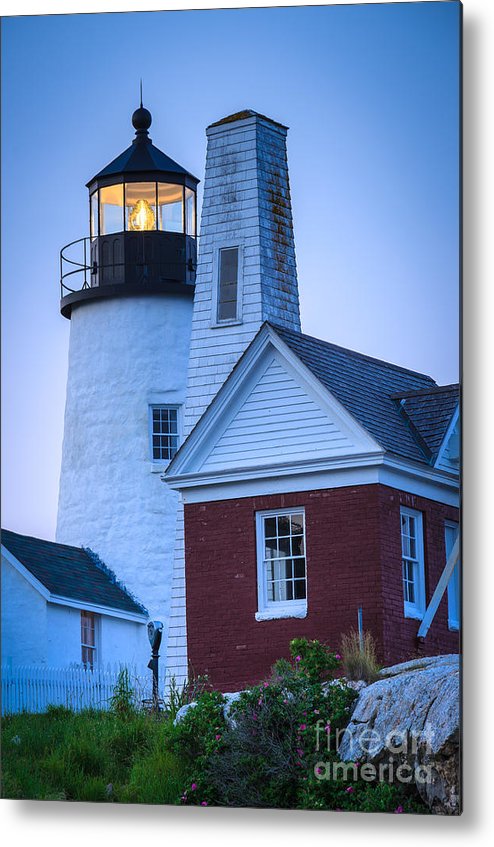 The watermark in the lower right corner of the image will not appear on the final print.

Pemaquid Point Light Aglow metal print by Tamara Becker.   Bring your artwork to life with the stylish lines and added depth of a metal print. Your image gets printed directly onto a sheet of 1/16" thick aluminum. The aluminum sheet is offset from the wall by a 3/4" thick wooden frame which is attached to the back. The high gloss of the aluminum sheet complements the rich colors of any image to produce stunning results.

Pemaquid Point Lighthouse just after sunset near Bristol, Maine. From Wikipedia: The lighthouse was commissioned in 1827 by President John Quincy Adams and built that year. Because of poor workmanship (salt water was used in the mortar mix), the lighthouse began to crumble and was replaced in 1835. The second contract for the construction stipulated that only fresh water be used. Keeper Isaac Dunham oversaw the construction and wrote in a letter to the US Lighthouse Establishment that the agreement was upheld and the work went well. The original light was an Argand-Lewis parabolic reflector, lit with candles and with a visibility of 2 miles (3.2 km). Augustin Fresnel invented a superior way of focusing light in the early 1850s and most lighthouses in the US were converted to the Fresnel Lens, with Pemaquid Point receiving a fourth order Fresnel in 1856. The lens is one of only six Fresnel lenses still in service in Maine.[4] The keeper's house was built in 1857. Marcus A. Hanna, th...

Tamara Becker is an outdoor nature photographer who enjoys all things in nature. She is the author of the blog Different Isn't Wrong, It's Just Different at differentisntwrongitsjustdifferent.wordpress.com. Several of her images have appeared in galleries for the Friday Fotos series on the Arizona Highways Magazine blog. She had an article published in "Our Iowa" magazine in the Oct/Nov 2016 issue for the column "What I Miss About Iowa". In 2017 her photo "Steam Engine #6" received First Place at the Iowa State Fair in the class "Planes, Trains & Automobiles". She has had multiple images on display at the Iowa State Fair. You can follow her on Instagram at https://www.instagram.com/tbeckerphotos/ Copyright Notice: All images on...