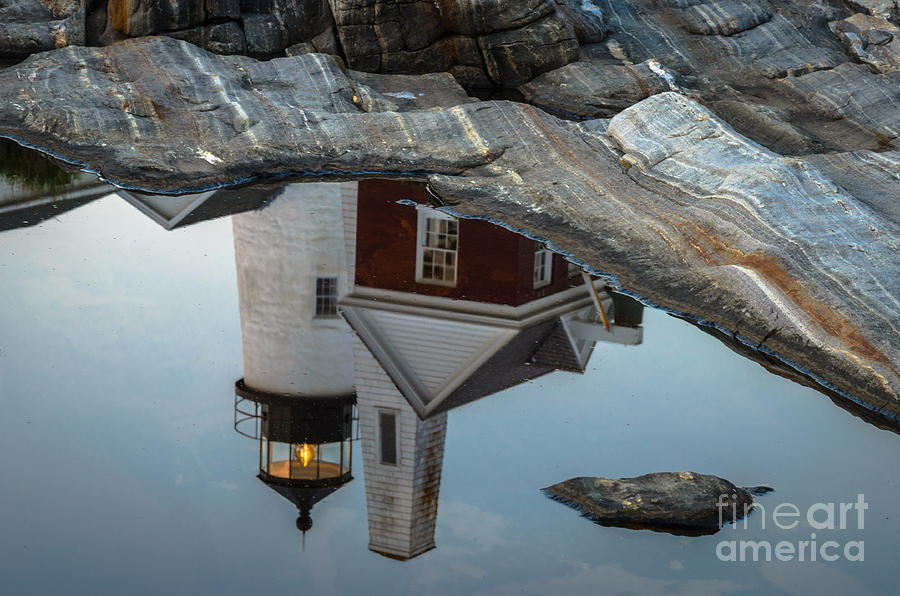 A reflection of Pemaquid Point Light near Bristol, Maine. Is the image right side up or upside down? It's actually right side up.

The lighthouse was commissioned in 1827 by President John Quincy Adams and built that year. Because of poor workmanship (salt water was used in the mortar mix), the lighthouse began to crumble and was replaced in 1835. The second contract for the construction stipulated that only fresh water be used. Keeper Isaac Dunham oversaw the construction and wrote in a letter to the US Lighthouse Establishment that the agreement was upheld and the work went well.

The original light was an Argand-Lewis parabolic reflector, lit with candles and with a visibility of 2 miles (3.2 km). Augustin Fresnel invented a superior way of focusing light in the early 1850s and most lighthouses in the US were converted to the Fresnel Lens, with Pemaquid Point receiving a fourth order Fresnel in 1856. The lens is one of only six Fresnel lenses still in service in Maine.[4] The keeper's house was built in 1857.

Marcus A. Hanna, the only man ever awarded both the Medal of Honor (earned during Civil War for bravery on July 4, 1863 [5]) and the Gold Lifesaving Medal (for rescuing life on January 28, 1885 at Cape Elizabeth, once served as keeper of the light. The station was automated in 1934.

By popular vote of Maine residents, the lighthouse was chosen to be featured on the Maine quarter, the 23rd in the 50 State Quarters Program issued by the U.S. Mint. Also depicted is a 3-masted schooner intended to resemble the Victory Chimes. Exposed bedrock descends from the lighthouse to the ocean creating a unique, scenic landscape. The geological history of these formations dates back hundreds of millions of years. These imposing structures have made this lighthouse with its setting one of the most photographed on the Maine coast.

In addition to the image found on the state quarter, an image of Pemaquid Point lighthouse is featured as a possible background in Windows 7.

The lighthouse is owned by the U.S. Coast Guard and is licensed to the American Lighthouse Foundation. Friends of Pemaquid Point Lighthouse (FPPL), one of the 21 chapters of the Foundation, operate the lighthouse. Upkeep and ongoing restoration are funded solely by visitor donations. FPPL member docents open the lighthouse for visits from mid-May to mid-October.

The lighthouse was added to the National Register of Historic Places as Pemaquid Point Light on April 16, 1985, reference number 85000843."

Thank you David Dehner for the feature in the group ABC Group!

Thank you Bruce Bley for the feature in all things on Atlantic Coast! Greatly appreciated!

Thank you Colette V Hera Guggenheim for the feature in Water Reflections Photography and the compliment! Truly appreciate being featured in your group.